Four Peaks Rotary Club: How an orphanage in Mexico became a family affair 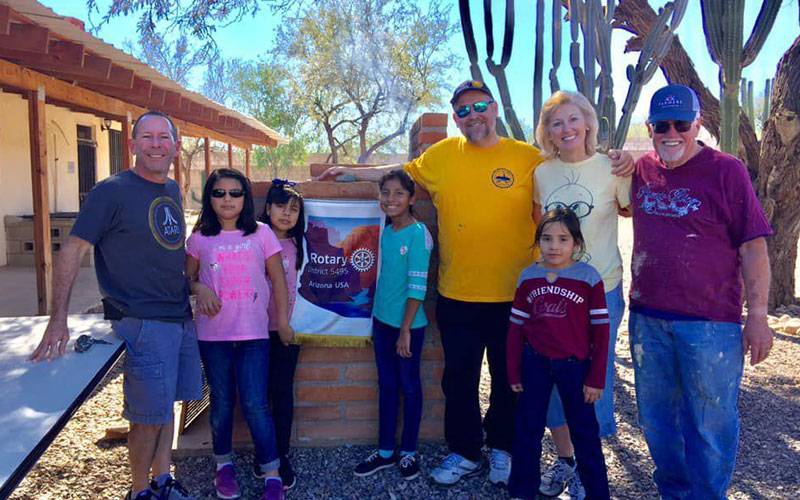 When you buy beer and pretzels from the Four Peaks Rotary booth at Oktoberfest or sign up to play in their annual golf outing, you’re supporting projects like Casa Esperanza.

Hermosillo city limits, Casa Esperanza Para Niños provides shelter, food and education for 45 abandoned and abused children. In January, members of the Four Peaks Rotary Club will caravan to the orphanage armed with paint supplies and tools. It’s a trip they’ve been making each year since the orphanage was founded in 1999. And, although the Club officially supports the orphanage as an International project, it’s the bond members have formed with the children and its founder that make the trip feel more like a family reunion.

Club member Dick Bauer remembers when the newly-formed Rotary Club was looking for an International project. When he casually mentioned Mexico might be a good place to look given the proximity, one of the district governors said “man, have I got someone for you to talk to.”

That “someone” was Adonna Cullumber, an Arizona resident who had visited Hermosillo and seen homeless children living in storm sewers to protect themselves from gang members and drug cartels. When her efforts to establish an orphanage for these children was finally approved by the Sonoran government, Bauer pitched the project to the Club.

“Our Rotary Club by and large outfitted that house,” he said. “We came up with the money even though we were only two years old. We stepped up with a truck and drivers, beds, bedding, a television, some clothing and other necessities.”

Since then, Casa Esperanza Para Niños has grown from a small, rented home and nine children to a 3.5-acre gated ranch which houses 45 children. Abused and abandoned children now have a safe, supervised place to sleep at night, medical care, and no longer have to forage for food. They attend school regularly, several are now in college.

All along the way, the Four Peaks Rotary Club has supported them financially and with sweat equity. This year, the Foundation has allocated $5,000. In January 2020, some of the members will travel to Casa Esperanza for a working weekend armed with paint supplies and tools. They’ll take the kids out for dinner on Friday night. As in years past, they may go to the beach or to an amusement park. Although language is a barrier, the children will communicate their gratitude with smiles and hugs.

Pam Carlson, who became involved with the project when she joined Rotary five years ago and is the self-proclaimed “trip cheerleader,” said the most rewarding aspect is knowing the children are safe and thriving in the Casa Esperanza environment. “Through a little bit, a lot can be accomplished,” she said. “It’s making a difference in people’s lives. That’s what Rotary is all about.”