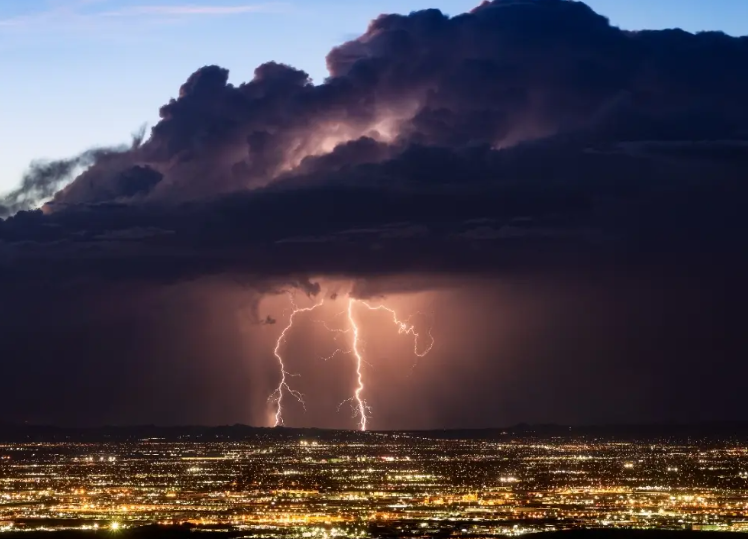 The temperature is high, the winds are getting stronger in the afternoons, and the thunderhead clouds are building up in the north.

If you’re familiar with our weather patterns, you’ll know these are some of the early signs of monsoon season, perhaps the most interesting time of the year when it comes to meteorological phenomena.

The National Weather Service declares that June 15th is the “official” start date for the monsoon season, and it runs through September 30th. These dates are the average, but there are other ways to tell when the season has begun.

Scientifically speaking, the monsoon has begun when three consecutive days pass in June during which the Dew Point at night exceeds 55 degrees. That means that water vapor reaches its saturation point, turning to cloud at air temperatures of 55 and below.

Another way to tell when the season has begun is to listen for cicadas. Cicadas begin their chirping during the hottest, driest weeks of the year. These weeks just happen to often coincide with the dew point exceeding 55 degrees. Once you hear cicadas outside for several days in a row, you’ll know it’s only a matter of time before the first storms begin.

While the season may begin halfway into June, June is still the driest month of the year in the valley. Typically, the first raindrops of the season won’t hit the ground until the first week of July.

This was the case in 2021, which turned out to be a record-breaking monsoon season in many parts of Arizona. Check out Weather.gov’s 2021 Monsoon Review for more details on what made last year’s season special.

The National Weather Service is predicting another above-average storm season for the summer of 2022, so stay tuned for some of the best shows of nature that Arizona has to offer!