For the Love of Wildlife: Ranger Amy Burnett 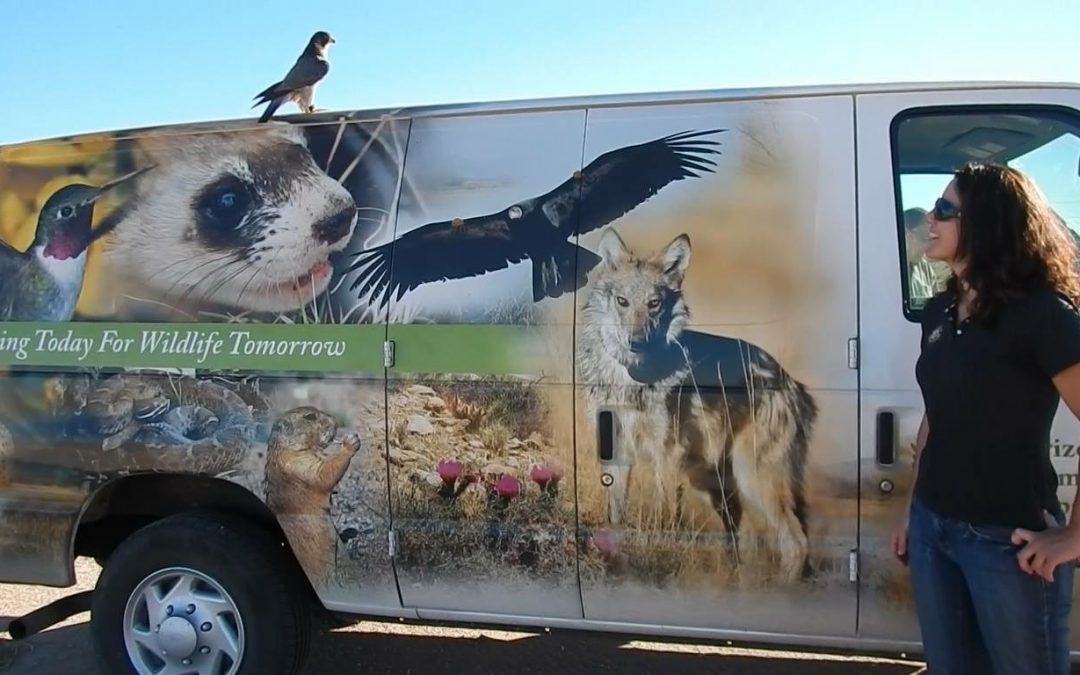 Ranger Amy Burnett is well-known in Fountain Hills for giving us an up-close look at snakes, scorpions, and other fascinating desert wildlife. Whether you’re five or ninety-five, she opens a world of awe for these unique creatures.

If you ask Ranger Amy if she’s always loved animals, she’ll immediately straighten up as a big smile spreads across her face. “Yes! I grew up in New Hampshire and my parents were always telling me to go outside to play. I was always picking up snakes, but since the only venomous snake was endangered, my parents didn’t worry too much about me.”

In Fifth Grade, her school had Career Day. While her siblings dressed up as a nurse and an airline pilots, Amy couldn’t think of a career that interested her.

“I knew I loved animals,” said Amy, “so I made up a career where I’d handle snakes. I went outside the night before and caught a garter snake and took it to school the next day. I took it out and showed it to my classmates and answered questions. Later, when I was in gym class, I was asked to return to the classroom because the snake got loose.”

Fast forward a decade and Amy earned a degree in Environmental Science from the university in Asheville, North Carolina. 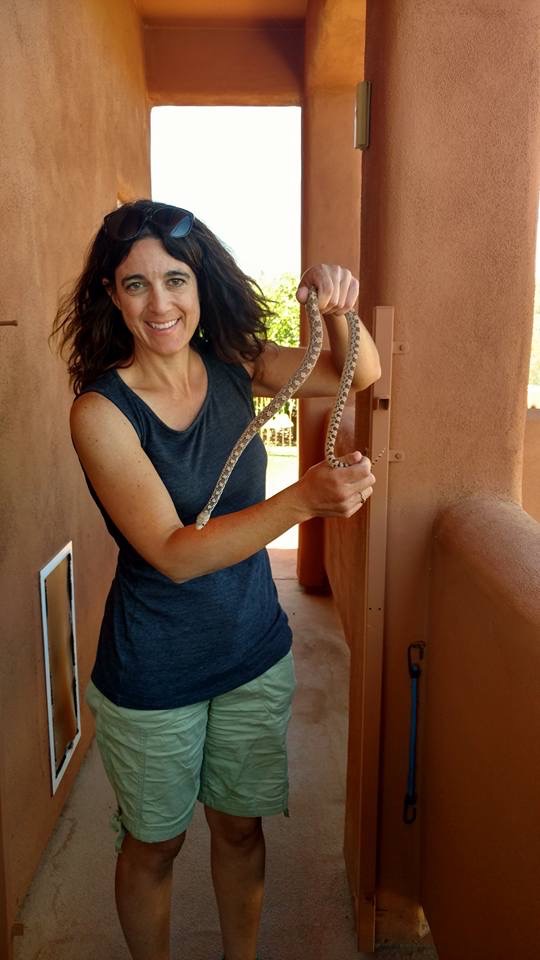 “When I first got out of college, I had no idea what I wanted to do,” said Amy. “I got a summer job at a wilderness camp for at-risk teenage boys. It was my job to take them on a two-week hike on the Appalachian Trail. Imagine being forced to hike for two weeks and you don’t want to hike.

That’s when a good friend stepped in and asked Amy if she’d ever thought about being a ranger.

“I hadn’t thought about that,” said Amy. “She invited me to her house and helped me fill out a 13-page application for seasonal work with the National Park Service. I ended up with a great six-month seasonal job on the Blue Ridge Parkway. I wore the Smokey the Bear hat and had a snake named Snoopy.” 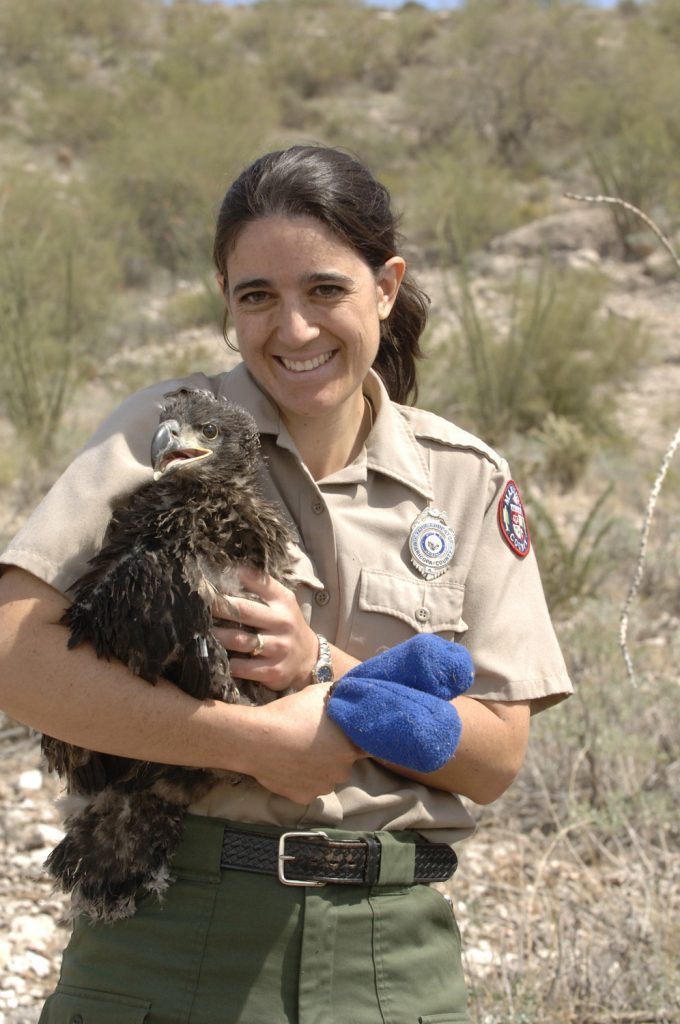 Amy enjoyed the job so much that she applied for another job with the National Park Service the next year. She ended up at Point Reyes National Seashore in Northern California. She loved seeing the gray whales that were visible from the lighthouse, the tule elk, elephant seals, bobcats, mountain lions, coyotes, and three species of deer that were abundant in the park.

After that season, Amy took a job with California State Parks. But living in California was expensive. She was making regular visits to Scottsdale and was drawn to the idea of living in the Sonoran Desert. She finally made the move and started a new job at the Desert Botanical Garden, then took a job with Maricopa County Parks. 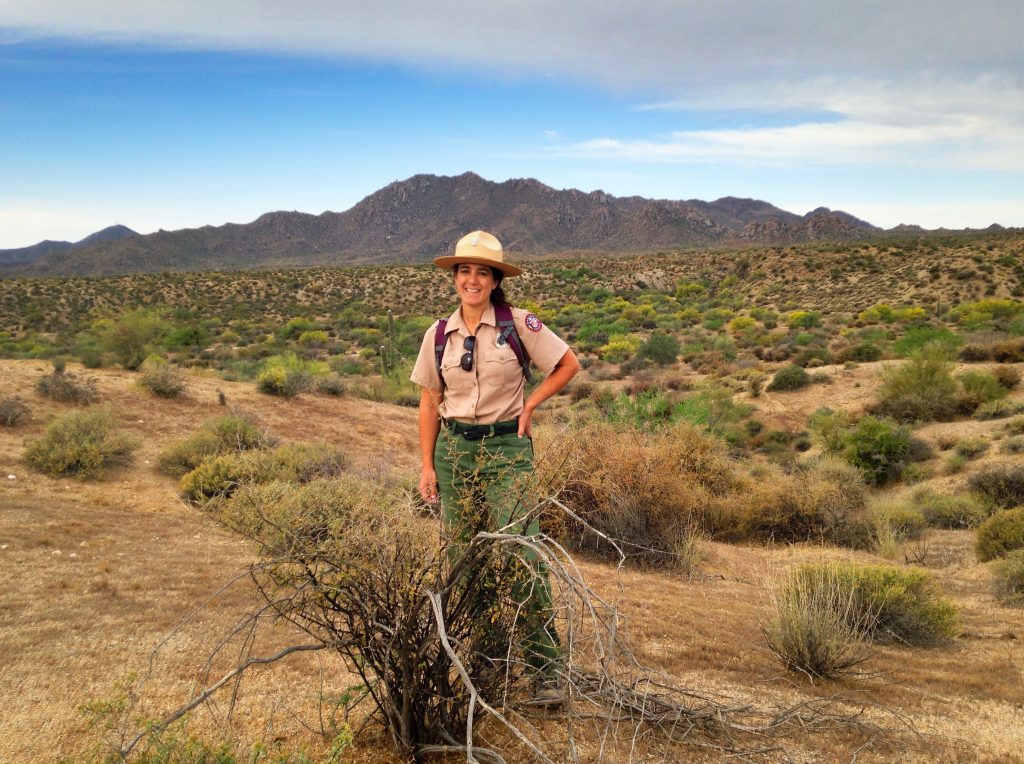 “I’ve been a park ranger in some capacity since 1998 and love it so much,” she said.

She now works for Arizona Game & Fish, and although she’s not really a ranger, the name Ranger Amy has stuck. People recognize the name now.

Amy serves as the Information & Education Program Manager and the Public Information Officer for Arizona Game & Fish. When a bear runs through town and the media finds out about it, they have her on speed dial. 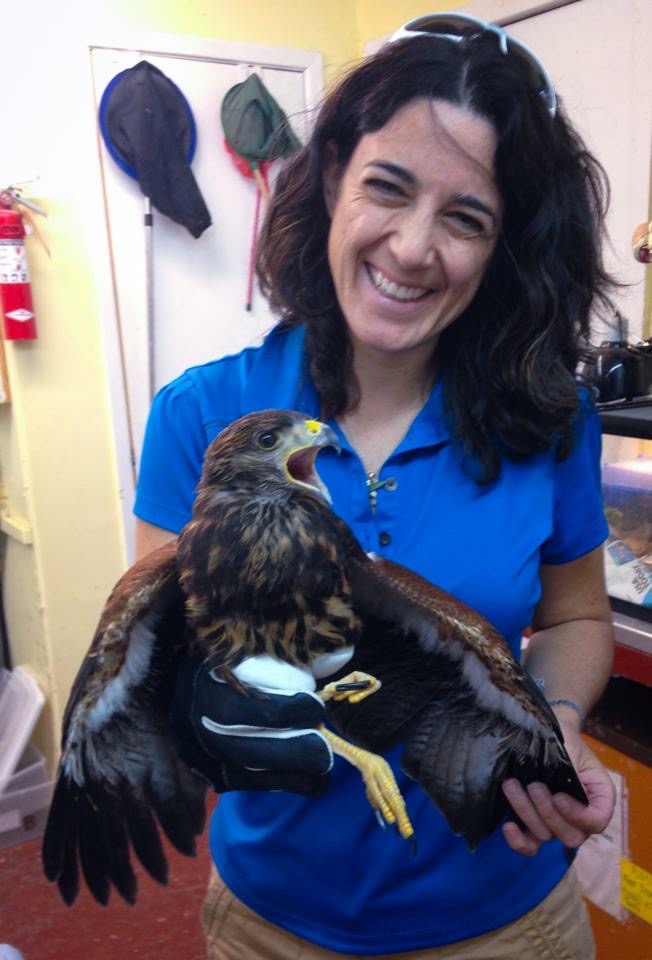 “I love to get on camera because it’s an opportunity to squash the rumors and the myths, and to let people know these animals aren’t really as scary as you think. Sometimes, I have to tell people to stop feeding the wildlife because that’s usually when dangerous interactions happen. And I still have to tell people that javelinas really are dangerous. I just want people to have a healthy respect for what these animals are capable of doing while also helping people to appreciate our wildlife.”

Has she ever been stung?

“Only by a bee. I’ve never been stung by scorpions.”

Has she ever been bit by a snake?

“I’ve never been bit by a venomous snake, but I was bit by someone’s pet snake. I borrowed a snake from a friend to give a presentation to Fourth Graders. I didn’t know the snake very well, and when I reached in to grab it, it bit me in front of the kids. It latched onto my finger and I was bleeding. They thought it was cool and that’s probably all they remember from my presentation.”

Does she ever get the sensation of creepy crawlies up her spine?

“Not really. Only with cockroaches. Cockroaches are my least favorite critter. I’ve also had black widow spiders in enclosures in my house and those made me uncomfortable.”

Amy enjoys doing other programs outside of her regular job. One of her most popular programs is the live events she does at Bone Haus Brewing. 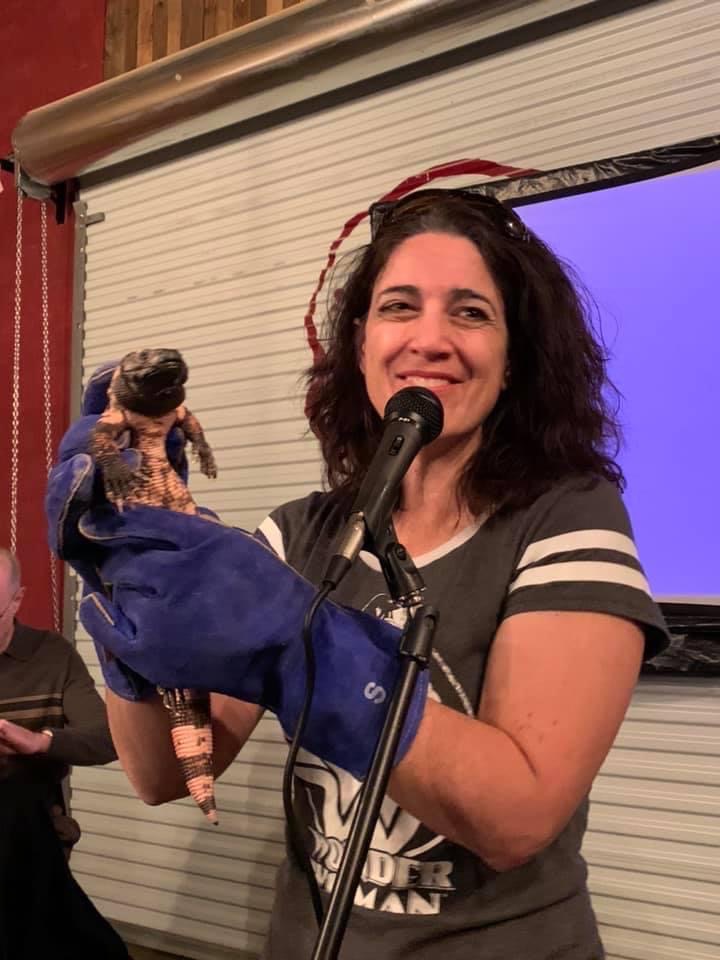 “I don’t think a program about snakes and scorpions would work at every brewery. Each brewery has its own vibe. Bone Haus has the right vibe for people to sip on a beer while learning about desert wildlife. There’s something about the Bone Haus brand with skulls and skeletons that makes this the right program for this brewery.”

She also offers frequent programs for the Kiwanis Club, the Rotary Clubs, and the local assisted living homes.

“The residents at the assisted living homes love seeing all of my animals,” she said. “One time, I brought out a snake and a 90-something-year-old man spoke up and told a story about picking up snakes in Iowa when he was a kid. Later, an employee told me, ‘He never talks!’”

Rarely does a week go by without someone reaching out to Ranger Amy through social media for help with a bird or some other wildlife concern. 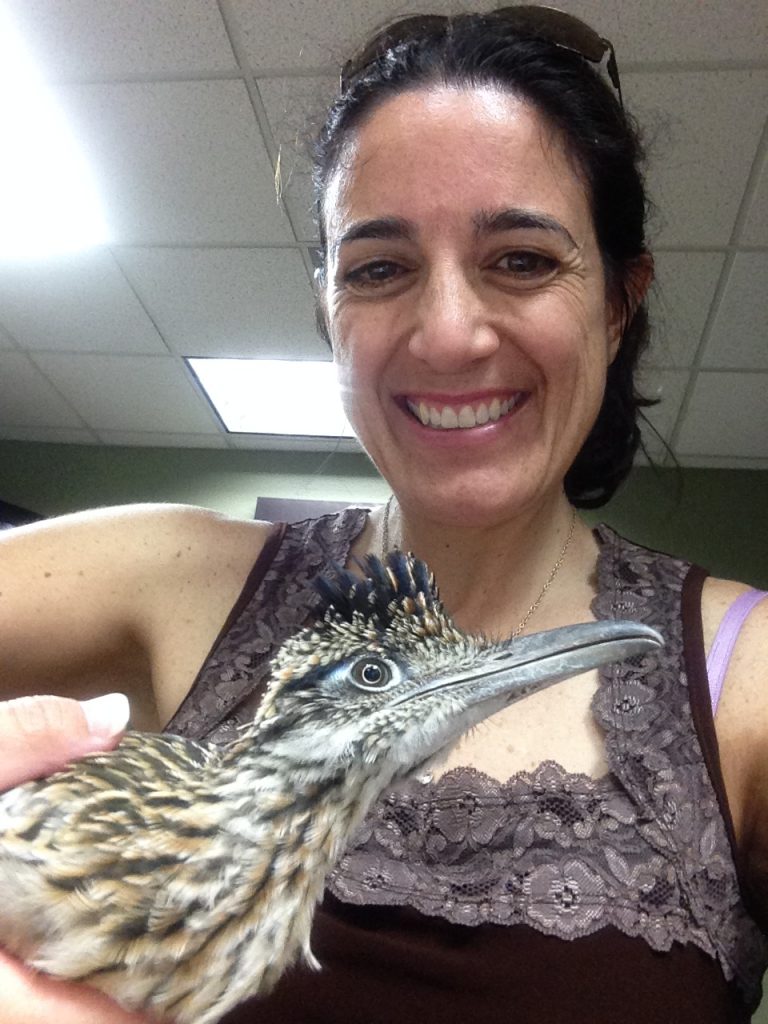 “People ask me a lot about inured or abandoned birds. I always tell people to make sure they are actually injured or orphaned before they interfere. Mourning doves make lousy nests that are easily blown out of a tree during a storm.

“Usually, if there’s a bird on the ground, the momma is still feeding it. Fledglings often hop out of the nest a day or two before they can actually fly. Leave them alone because momma is definitely nearby. If you interfere, you’re stealing it away from its mother.”

Injured or orphaned birds can be dropped off at Liberty Wildlife. They have standard business hours and an easy window drop-off.

“If someone comes across an injured raptor or large bird, I’d prefer they reach out to me,” said Amy. “No one should handle these birds without proper equipment and knowledge.”

If a snake is spotted in your yard or in your house, don’t call 911. Instead, call the local Fire Department at 480-837-9820. You can also call Rattlesnake Solutions for removal. This company, which is highly recommended by Ranger Amy, also installs snake-proof fencing for your yard.

Amy’s hobbies outside of work are varied and keep her life exciting. She’s an avid trail runner for short- and medium-distance runs and races. She’s even won a few races. 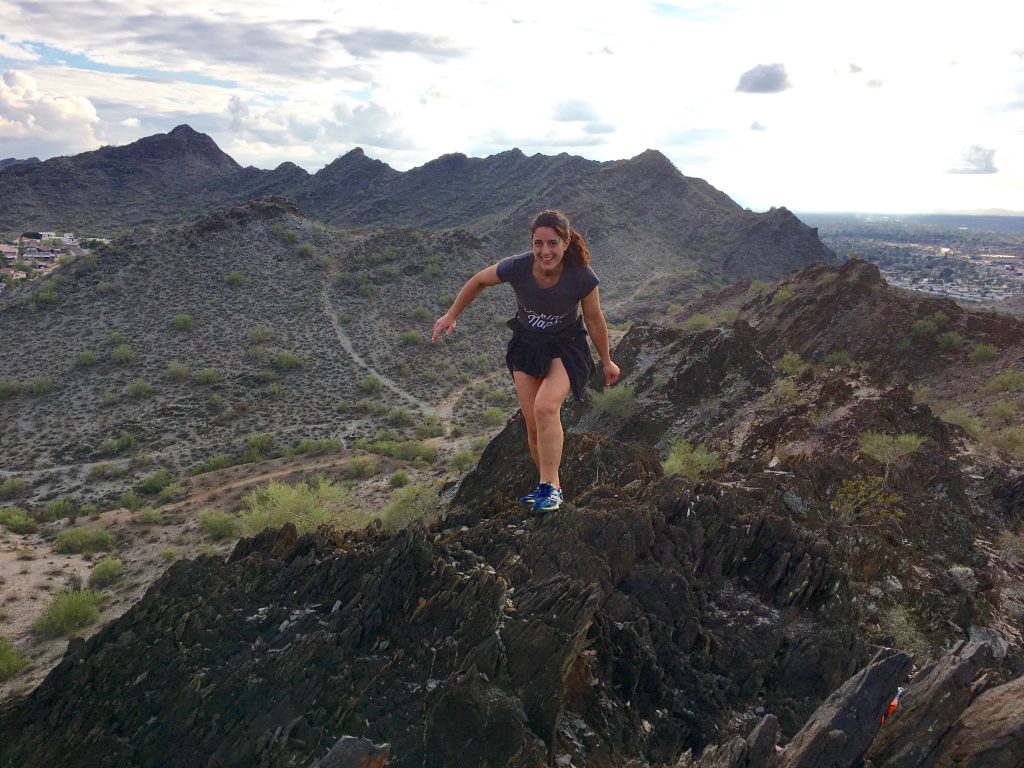 “I love baseball. This summer, I’ll be traveling to Alaska to watch the Midnight Sun Baseball Games. The games are at midnight with no lights because the sun doesn’t set in the summer up there.”

She’s also a regular guest on her boyfriend’s podcast, Baseball By Design. “I’m the official wildlife correspondent. So many of the minor league baseball teams are named after animals. Portland Seadogs. Greeneville Grasshoppers. People love the animal segment.” 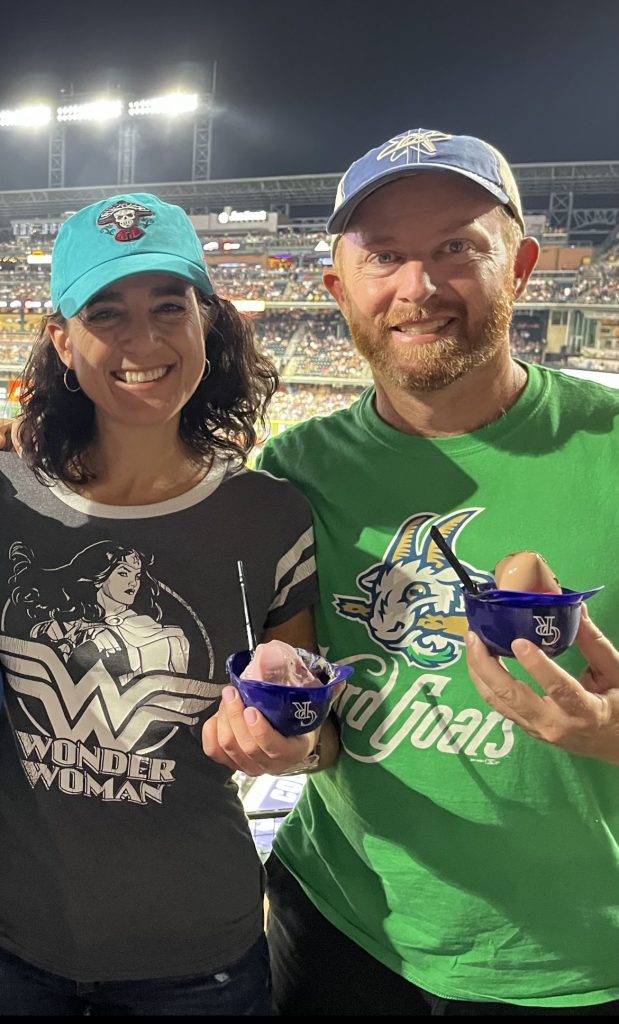 Amy also was involved in the Fountain Hills Theater, acting in productions such as The Producers, The Full Monty, Sound of Music, and more. She loved being able to express her talent for singing. 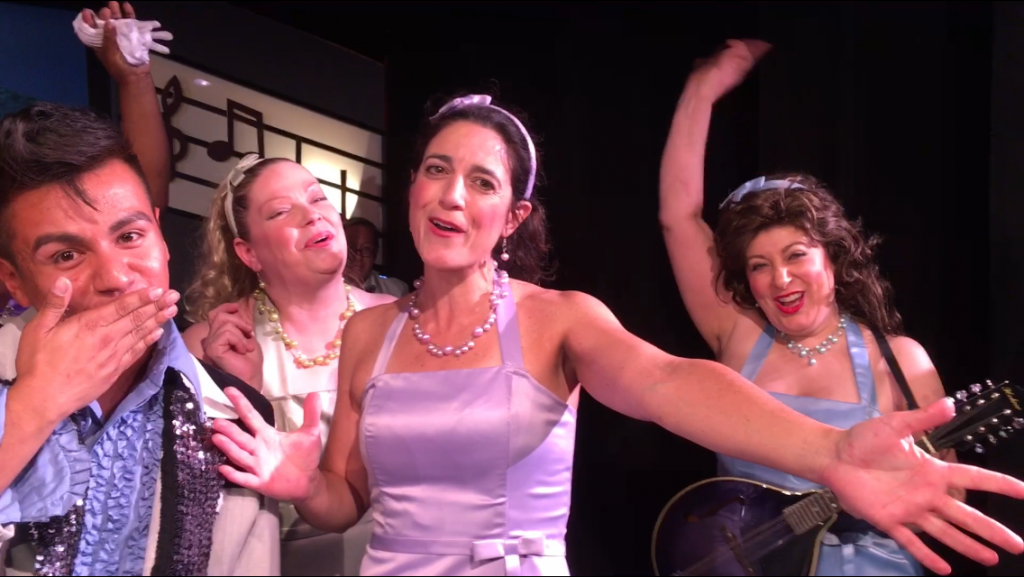 And to add a cherry on top of her love for animals is her work in fostering dogs. “My life is too busy to have my own dog right now, so I love to take in foster dogs to get my fix and then help them find a new home. I usually work with Aussie & Friends Rescue and Southwest Collie & Sheltie Rescue.” 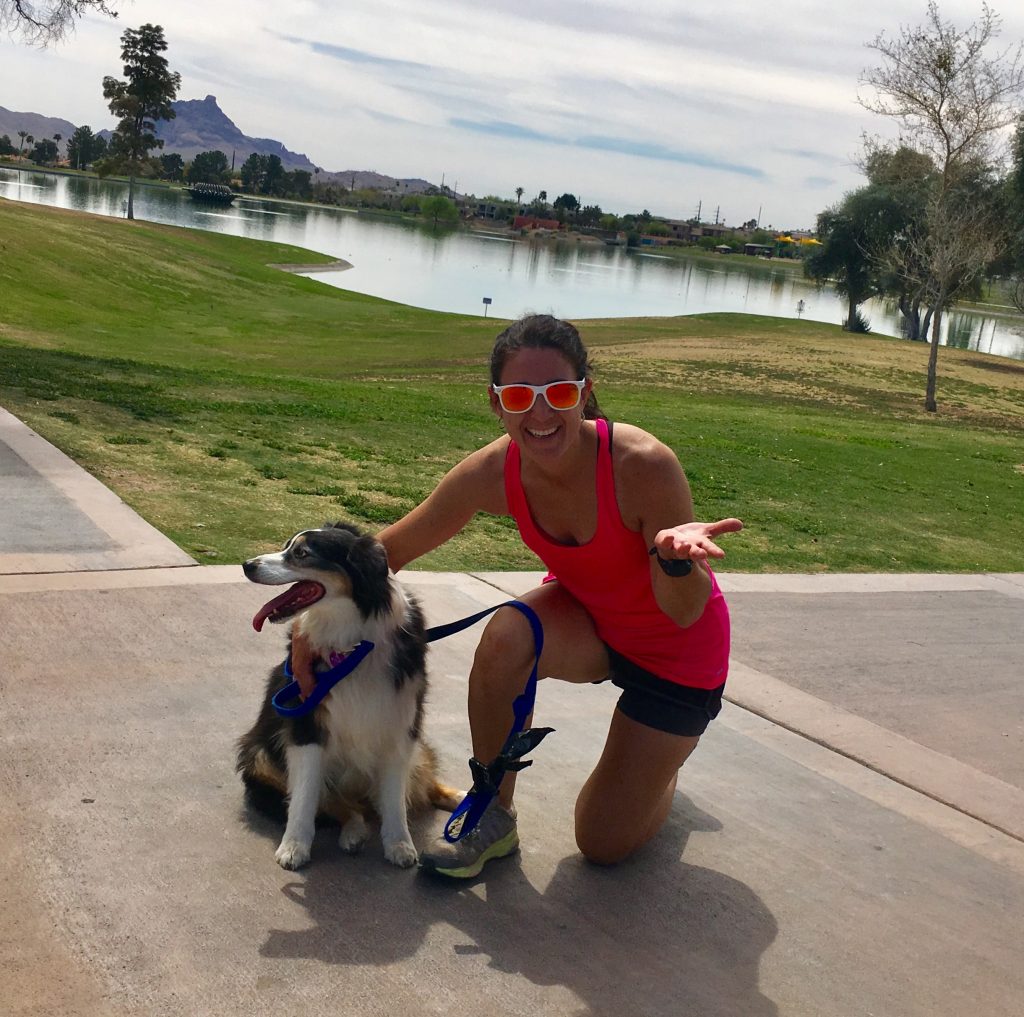 Amy is also a graduate of the Fountain Hills Leadership Academy.

“I loved finding out about the inner workings of our town. It was cool to see how much work and effort goes into making this town what it is and it gave me more pride and greater love for it. I lived in North Scottsdale before moving here and I never could find the sense of community that I found once I moved to Fountain Hills.

“Fountain Hills is a special town in a very special place. There’s no place like the Sonoran Desert anywhere else in the world. We truly have the corner on the market for the coolest and most unique animals.”

She has a special memory of a comment made by a woman attending one of her presentations at Bone Haus. “She told me, ‘You make the desert less scary.’ Everyone needs a little mystery, but I want to take enough of the mystery away to remove the fear and leave them with awe and wonder instead.”